I am on an E-mail list. I found a photograph that was very interesting and relevant to the list.  It showed someone in a doorway. It caused no end of speculation about what sort of door it was; what was inside, beyond the door etc.  It was like seeing a door that says, “Do Not Enter”, or “Employees Only” and curiosity causes you to want to know what is behind the door.  Someone said the doorway was to a house.  Then they sent a picture of the “type” of house they thought it was. I like looking at architecture.  I also like looking through decorating [interior decorating] magazines. Sometimes I see a photograph of a façade or a door and wonder what it looks like inside.

The curiosity got the better of me.  I could not legally and ethically satisfy this curiosity, so I wrote about it.  (See "Bagpiper @ Ate" and look for "The Big Yellow Door".  See also, the "Life Lessons" page in the Journal.  Read relevant entries from Jan. 21, 2007 onwards.)

For the longest time I have imagined what type of dwelling I think certain types of people would live in.  I find myself daydreaming about these characters, their houses and lives.  It is sort of a "what would happen if____" thing.  One scenario is what would happen if I spent time in London. (London, England)  I was writing a radio drama (not on this site) it had a fictitious actor in it.  I imagined what sort of "flat" (apartment) he would live in etc.  It got incorporated into the London scenario.  I went to draw it out in "Paint" last night.  I call it the "impossible place" because I realized that how I imagine it, is not logically possible.  This isn't where I would choose to live.  It is just where I imagine such people might live.

I tried  to draw it the best I could in "Paint".  It is very difficult to do certain things that require "round-ness".  I tried to draw the outside.  I am not good with perspective on a good day with pencil and paper.  But the limitations of "Paint" means that my perspective is even worse in this.  I tried to find a photograph of a real place that matched my mind picture.  Since my mind picture isn't based on reality, there wasn't a real photo of this place.  I tried to draw this façade from the best photo I could find.  I don't know if the photo is of an Edwardian, Victorian or Georgian place. It is kind of plain on the outside so I suspect that it isn't Victorian.  I never really imagined the outside of "my" building in any great detail.  I just imagined leaving through the front and seeing the streets through windows.  I just happened to find a picture that had a blue door on it.  I didn't plan that.  The other doors had different colors.  There's lots of sunshine in my mind picture.  I don't know how to draw that either.

Please over look any spelling mistakes "Paint" doesn't have a spell checker. 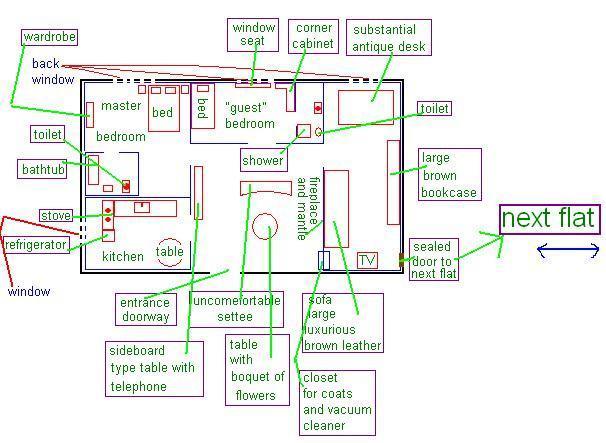 This shows all the things in this flat.  The bookcase is wooden.  It is very nice dark wood with slight decoration to it.  (elegant)  I don't know where the guests would hang their clothes.  I don't allow for a wardrobe in there.  The reality is "mentally" the guest room bathroom ends near the sink.  But then there would be all this "dead" space between the bathroom wall and the outer wall of the building.  Another thing about that bathroom is, when I imagine it, the toilet and shower are interchangeable.  It depends upon what is "needed" at the moment. I suppose the toilet should be closer to the sink and that the shower would be in the corner where the toilet is. I think the fireplace would have to be on an outer wall unless it was fake.  I don't allow for the chimney in this "fantasy".